On Air: The Sound of the Second Viennese School in Paris

If you browse through Le Figaro of the 30s, you will find a regular column entitled “Chronique T.S.F.,” or “Radio” in the late 30s, that contains a selected program of daily radio broadcasts all over Europe. Music programs occupied the majority of all entries on every list where radio broadcasts were categorized by musical genres. 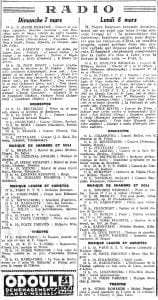 Unfortunately, this valuable information is not included in our maps, at least not yet. Considering that radio broadcasts are quite difficult to map out while less demanding with geography, we decided to leave out radios and only focus on concert performances in our maps. Nevertheless, it is still worth pointing out what we are missing by excluding wireless communication out of the project. Especially when our maps are potentially suggestive, even argumentative, it is important to keep an eye on the issue of bias.

As this comparative map shows, concert performances of the Second Viennese School decreased from the 20s to the 30s, which seemingly suggested that Parian audience were losing accessibilities, or somehow losing interests to the repertoire of the Second Viennese School during the 30s. However, if taking radio broadcasts into account, we may come up with an opposite speculation that people living in the 1930s Paris might in fact have more opportunities than ever to listen to music by the Second Viennese School because of the increasing popularity of the radio. A wide selection of channels, including those in Austria and Germany, was available for the Parisian audience. Notably, not only recordings but also live radio concerts and even premiers were on the air, featuring a variety of musicians and performing groups, including the composers themselves. Therefore, even though performances were decreasing in the concert halls, music by the Second Viennese School was not fading out of Paris thanks to radio broadcasts. There is a great possibility that when the complete work of Alban Berg’s Wozzeck finally got performed in Paris at the Opéra in 1963, the Parisian audience had already known more excerpts than those actually performed in local concert halls, if not the whole work.1

Therefore, although maps typically reflect data composed of objective facts, the discriminating process of data collection can still cause the final product biased. Selectiveness by no means reduces the value of a map but requires more careful interpretations. It is also important to point out that despite we decided to exclude radio from our maps, other scholars like Christophe Bennet have done great scholarships on this subject about radio and music. The influence of radio on the exposure, communication and acknowledgement to the music of the Second Viennese School among the French audience is significant that is worth of further discussion.

1 In fact, before the physical premiere at the Opéra, a radio production of the full work took place at Théâtre des Champs-Élysées in the 50s.