I don’t mean to say that Disney princesses aren’t great and inspiring (except Aurora, what did you even do? Sleep? Great role model, Disney), but often their merits are accompanied by the picturesque fairy-tale. They are all heterosexual, most of them are Caucasian, and most are surrounded by some form of “magic” (talking animals, talking teapots and armoires, et cetera); they all find love and bliss in their made-up world. Why do we strive to liken ourselves to such limiting figures when real historical figures provide not only real-life relatability, but a gateway into the past?

This is hardly as relatable as a real-life princess who lived in 1920’s Paris – her world engulfed her with new discoveries in love, music, and friendship. And, no magic carpets carried her away to this “shining, shimmering, splendid” world.

I give you Winnaretta Singer, Princesse de Edmond Polignac, passionate friend, lover, and patron of the arts. Through her relationships and social network, her money, and her personal life, the musical world around her flourished.

Her family alone made her forever fame-adjacent. Her family owned the Singer Sewing Company (of which she was an heiress), her younger brother had a child with Isadora Duncan, and her various 23 other siblings found fame in philanthropy. Though she was lesbian, she married twice, both times to Princes in their own right. (Edmond de Polignac was her second marriage). High society, propriety, and intrigue surrounded her regardless of her own achievements. Additionally, her relationships with other women spread her reach – among these affairs were painter Romaine Brooks, composer Ethel Smyth, and socialite/novelist Violet Trefusis. These romantic relationships (unintentionally) ensured that her influence would extend beyond music alone. Every aspect of the arts found its way into her life. 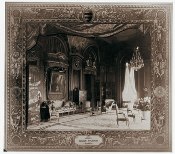 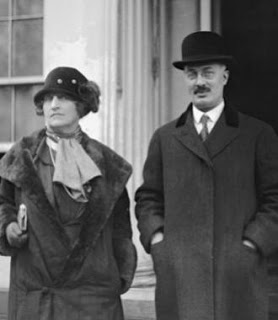 This is not to say she did not contribute immensely to the world around her. Jeanice Brooks notes in “Nadia Boulanger and the Salon of the Princesse de Polignac” that salon life is often seen as “private” and therefore amateur or of lesser value than “public” music (intriguingly noted as mostly male-dominated). However, our Princesse created a salon atmosphere not only run by a female, but with a formidable, authoritative influence. One can utilize fame and influence in two ways – for private gain or for the betterment of others. Rather than the fickle former, Winnaretta chose the latter. She poured copious amounts of money into commissioning and premiering new avant-garde music in the salon she established in her own mansion. Various works by Ravel, Stravinsky, Satie, and others were dedicated to her and her appreciation for the music that would carve its own name into the stones of history. Her salon even furthered the careers of composition teachers like Nadia Boulanger (Brooks).

(Stravinsky’s “Renard” commissioned by and dedicated to the Princesse)

Composers and performers flocked to her salon, but her reach extended beyond that which was imaginable. Authors like Proust and Cocteau frequented along with socialites and dancers (Isadora Duncan and Serge Diaghilev, to name a couple). The Princesse de Polignac brought new, fresh music into the posh society and let it grow roots in literature, dance, and more importantly, the personal lives of the people around her. The politics of a noble family mixed with the greatest literary minds of the time in a terrific gust of wind that carried with it the beginnings of change in the musical life of 1920’s Paris in the form of avante-garde music. This change’s success was intrinsically and crucially linked to the benevolence of this woman who championed salon life, patronage, and zeal for a life which is nothing short of extraordinary. In a land of male-dominated, “public” music, she shattered all expectations and became a strong female figure.

Has a Disney princess ever inspired such real, tangible change?

As if her rank/fame and benevolence were not enough contribution to the thriving musical life around her, she also personally contributed to the fine arts scene. The picture of her above is a self-portrait, and her paintings were often mistaken for Manet. She also became an accomplished organist and pianist, performing on various an occasion in her own salon. Below, she is seen with her painting “Santa Maria dela Salute.” 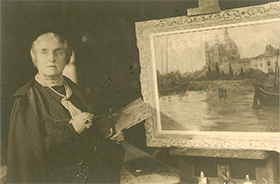 Altogether, I have argued that she had influence at the time – but how does that relate to today? Why should anyone care? This woman was a shining example of what it meant to be human – turbulent love affairs, passion for the arts, a lavender marriage, a family legacy to uphold. Her life was equally heartbreaking as it was exhilarating to behold. This makes her more relatable than a girl stuck in a tower singing “When will my Life Begin?” (I’m looking at you, Rapunzel). She didn’t wait for her life to begin – she went out and seized the things she was passionate about. She threw caution to the wind. As a representative of the gay and lesbian community, a champion of women’s power in the arts, and an advocate for new, young music that only needed funding and a place to start, she created a legacy that transcends time and place. Women and men from any generation can find a role model in the Princesse de Polignac.

It’s hard to imagine that a real princess could achieve the aforementioned accomplishments even though she couldn’t build an ice castle, but let’s be real. She was building a musical empire instead.