Paris during the 1920s seems to be a most enigmatic and frivolous place. The music was different, the people were changing, norms were being challenged and sexualities were becoming more present in the social spectrum. Stereotypically, the 20s were a place in history where people, especially women, began to break out of their societally-decided places and experiment with how they fit in with the world. Throughout the semester, these kinds of themes have stuck to me and seem most prevalent in music and social life during Paris in the 20s. To me, I think the most prominent issues are that of gender and sexuality.

In Paris, like a lot of other urban cities around the world, women began to break socialized norms and regulations. During the early 1900s, most women looked and dressed like this; 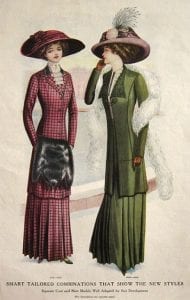 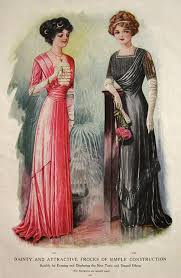 Almost every inch of skin was covered, excepting the neck, occasionally. However, during the 20s, skirts became shorts, wilder, and women began to accept a life of more promiscuity and freedom. Our class once discussed the different ‘types’ of women in French society. There was the mother at home, who was married and took care of the house and the family. Then there was the single woman, still moralized, since she was single because of the lack of single men. This lack of young men were because of the decimation of the war, and the killing of many soldiers and adolescent men. And then there was the so-called ‘modern woman,’ who chose to be single and was considered more on the male spectrum than the female. She looked more like this; 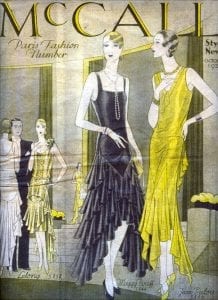 Because of the emergence of this modern woman, music societies like Le Moulin Rouge blossomed, using the new free woman as a sexual object to be oggled. Pieces like Poulenc’s Les mamelles de Tirésias challenged stereotypical gender roles and painted women and men in different roles than the audience was used to. Women like Winnaretta Singer, more famously known as the Princesse Edmond de Polignac, commissioned pieces and became a force to be reckoned with in the musical community. The music culture seriously reflected the changing of these roles, and how women accepted drastically different places in society.

A second theme of sexuality emerges in Paris. There was a sort of sexual revolution that went along with the roles of women being challenged in society. Since women began to get more sexualized attention, the role of queer women, and men, were more publicly noticed. Of course, the sexualization of the queer identity were quick to follow, with many “women with women” acts in places like the Moulin Rouge, but that’s another argument. Men in the music world like Francis Poulenc and Jean Cocteau were very open with their sexualities, and their close friends often wrote explicit letters to them about their sexual exploits. Some of the staples in the LGBTQ community, like la Princesse, were more closeted, open to only their close friends. But it’s the fact that they were even truthful at all that shows a shift in the idea of hiding queer predilections. Music, of course, reflected this. Poulenc’s music especially drew on the notions of de-sexualized heteronormative roles, in Les mamelles and especially with Les Biches. Androgyny, hetersexual romance, and masculine females and vice versa were extremely prevalent

Music tends to copy the social issues and controversies, and in the case of gender and sexuality in 1920s Paris, this is no exception. In terms of wrapping up the whole of the 20s in France, I cannot clearly say that these themes are the most important or even the most ubiquitous in Paris at the time. But to me, these are the most interesting that have stuck with me throughout the semester.