To be honest, I have not delved too deeply into researching about the Concerts Colonne…yet! However, I do have a plan for what I’m going to look into. I have already discovered some about what music the group typically performed and a bit about its musical directors/conductors over the years. There’s a plethora of listings of information (in the performance database and otherwise) regarding concerts–dates, venues, pieces, etc. What could be tricky is taking all this quantitative data, analyzing it (in a sense), and drawing conclusions or ideas that could be formed into support for a thesis.

It’s highly unlikely that there is a book titled, “The Concerts Colonne.” Oh how easy that’d be! Instead, I’ll have to gain more info by coming at this topic from different angles, though not as much as other students may have to with even lesser known subjects. Since this orchestra was founded in 1873 (long before 1920) and it still exists today, it’s frustrating to find great information that is related to times outside the 1920s decade. Although depending on the information, some of it may still help me gain insights and formulate thoughts about the orchestra. While researching, I’ll also need to look up the Orchestre Colonne because that’s another French name that the group has been identified as. Most of these “issues” I’ve mentioned may be a tad annoying during the process, but are really just part of the researching process, usually. So, I can’t complain too much.

This program exemplifies the challenges I’ve mentioned. It contains a listing of what was performed by the Concerts Colonne at a concert in 1895. 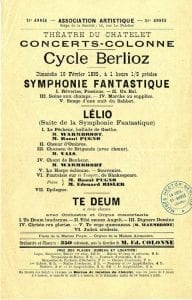