A Word on Cinematic Liberties

I almost feel like it’s a right of passage for the romantic at heart to see the 2001 film Moulin Rouge. My personal experience was sad to say the least. I started watching it, and about halfway through the movie, my mother came down and bluntly stated, “Oh, you’re watching that movie? She dies in the end you know.” I, of course, immediately wept for the lovestruck Satine and Christian. It wasn’t until later that I discovered that the Moulin Rouge was an actual, real-life place in Paris. I figured it had been made up, or existed a long time ago and was gone now. However, this is not the case.

After doing some research, I discovered that not only was the Moulin Rouge a popular place in the early 1900s, but it is still alive and well. To me, something that’s very interesting is how the pop culture movie portrayed the place itself. Today, it’s outfitted with neon lights, and huge signage. In the 20s, however, it wasn’t nearly as impressive. The thing that makes it so iconic, is the windmill on top if it’s roof. 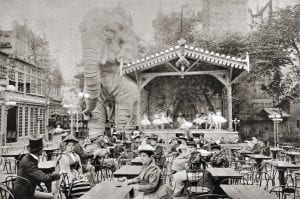 The Garden of the Moulin Rouge with it’s famous Elephant; 1908 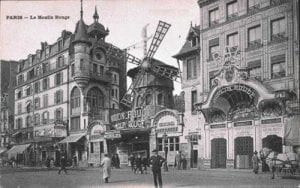 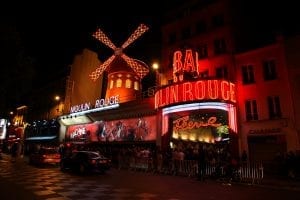 Now, what’s so fantastic is the accuracy with which the film portrayed the life and times of the Moulin Rouge in 1899.1 Through my research, I’ve accidentally stumbled upon a lot of articles about the movie, instead of the nightclub. But by doing so, I’ve leanred more about the movie and it’s historical accuracy, which is a big surprise.

The Moulin Rouge was founded by Charles Zidler and Joseph Oller in 1889, ten years before the movie is said to have taken place. The idea was that the nightclub would allow the rich and famous to enjoy a night of ‘slumming it’ with the poor, and the beautiful.2  The performers were often beautiful dancers, or singers, who could seduce and entrance the audience. It was a huge success. People came from other cities, other parts of France and even other countries. Many stars made their name on the stage of the Moulin Rouge, like Yvette Guilbert, Adelaide Hall, and Rudolf von Laban.3

The story of the film is not that improbable, and is actually based on an amalgamation of three operas/operettas; A young writer with Bohemian friends, falling in love with a terminally ill girl, is the plot line of La Boheme; A courtesan learning that love can also be true and idealistic is La Traviatta; the writer who travels to the “under-world” of the Moulin Rouge to find his love and tries to take her back to the “upper-world” comes from Offenbach’s Orpheus in the Underworld. 4 During the Moulin Rouge’s later years, it was the home of many operettas, like Porgy and Bess, and even occasionally bigger ones like La Boheme. It makes perfect sense that the plot line of a movie set in the Moulin Rouge would be based off of some performances that it might’ve housed.

As far as the ambiance of the film, it completely sticks with the ‘seedy men, half-naked dancing women” vibe the place had in the late 19th/early 20th century. The dancers were always dressed with wild colors, with plumage to the heavens. 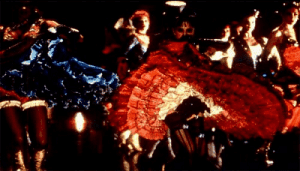 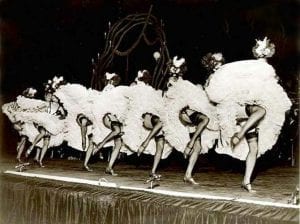 The real reason I chose this topic is apparent now; because I love the film adaptation. It’s fascinating to me how closely the director Baz Lurhman aligned his plot, costuming, and characterization to that of the real Moulin Rouge. I, for one, am interested in seeing a show there sometime, even if I’m not a rich and wealthy white male. The Moulin Rouge has been, and will remain to be, a staple in French culture.

(And if you’re interested in tickets to a show, be my guest! Amuse toi bien!)