Wanda Landowska: Master of the Harpsichord 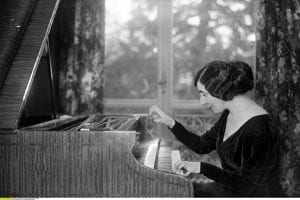 Polish national, Wanda Landowska, brought the harpsichord revival to France and all of Europe in the early twentieth century. After beginning piano at age four she received a more formal music education beginning at the Warsaw Conservatory with Jan Kleczyńsky and Aleksander Michałowski but was first introduced to Paris when she began studying there with Moritz Moszkowski at age 21. Wanda married Polish folklorist Henry Lew in 1900 in Paris and in that same year she began to teach piano at the French Schola Cantorum (Oxford Music Online). She continued to study and teach there until 1912 when she moved to teach harpsichord at the Berlin Hochschule für Musik from 1912-1919 until her husband was killed in a car crash. Later, she returned to Paris to continue teaching and start the École de Musique Ancienne in 1925 and she became a naturalized French citizen in 1938. There she remained until the beginning of the Second World War when she had to flee to the United States due to her Jewish heritage. Lakeville, Connecticut was her home until her death in 1959. But she never stopped playing. In 1953 she recorded the works of J.S. Bach, among others and the footage below shows an excerpt from Bach’s Concerto No. 3 for Harpsichord, BWV 1054 recorded in her home in Connecticut.

Wanda is often considered the greatest interpreter of J.S. Bach’s music. However her skills went beyond that and studying extensively in addition the works of Couperin and Rameau. This contributes to her musical Frenchness. Although she studied in Germany and her native Poland, France is where she was able to blossom and gain a name for herself musically. In 1909 she published her book Musique ancienne and later her partner Denise Restout edited and posthumously published her writings and compositions in a more complete edition in a book called Landowska on Music (New York, 1965). In her writings Landowska describes the technique and critical aspects of playing the works of Bach and other composers but also how her time in Paris shaped the height of her interpretations and musicianship. She is quoted saying: “Oh, well, you play Bach your way. I’ll play him his.” to one of her contemporaries.