To make the big leagues like Virgil Thomson would be every composer/critic’s dream. His music was world renown as well as his critiques reaching vast audiences. His approval could propel a young artist into stardom, such as Phillip Glass, and people would accept his critique of the first of movement of Beethoven’s Eroica Symphony as a “bore.” Unfortunately for us, Virgil Thomson’s fame and power reached a climax in the 40s and 50s, far from the period of time we set out to learn about. Alas his most famous work, an opera by the name of Four Saints in Three Acts, was composed in collaboration with French musician Nadia Boulanger during his time in Paris. Much that is written about Thomson is written on the period of his fame starting in the 40s, so it is slightly more difficult to research his role in 20s Paris.

What is delightfully helpful, is that Thomson was very prolific in his compositions as well as his critiques, and letters. Even more so was that he died in 1989, giving many researchers the opportunity to interview him directly. He was a well documented man, so despite the girth of work on him being done during a different time, there still leaves ample material to research his role in 20s Paris. 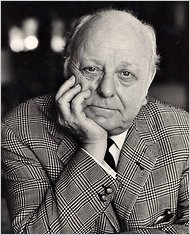 One source I was able to come across was a book of selected letters written by Thomson 1 . This collection of primary documents provides a pointillist way of seeing Thomson’s influence into Parisian culture. By looking across the web of correspondences, perhaps patterns can be spotted as to how people viewed Thomson when he was in Paris. Of course, there’s vast amounts of letters so to get to all of them would be impossible, but none the less a good starting point. We can assuredly trust this source, as it’s almost better than primary. These are the written down correspondences from the time period. Not summarized by Thomson later on, but exactly what he said. This will be most helpful because unlike the next source, we can see exactly what was happening by a first hand account, not a summary of it.

The next source is Thomson’s own Autobiography 2. How better to learn about a person than from their own autobiography? As we know from Stravinsky, his own words change as time moves on, so what he actually meant 30 years ago might differ from what he said now. However a mind as sharp as Thomson’s should provide still a good report of his happenings in Paris. From there we can branch out and research into exactly what others saw of his work.

Virgil Thomson: Composer on the Aisle. Written by Anthony Tommasini.

The last source that I would find helpful currently is a synthesis of both letters, interviews, eyewitness accounts, and unpublished papers detailing Thomson’s life, as well as shining some light onto Thomson’s sexuality3. Initially I thought this light might just be a lame hook used to draw in people to an unusually large book, but after reading a few pages it really brings the question to the table in a manner fitting such a man. Not as an excuse to sell a book but as a way to provide the public with some information that was most likely unknown to them. This secondary source is useful, as a lot of the work has been done for us in terms of verifying, identifying bias, and coming to terms with the information. The only thing left to do is find out what Tommasini’s bias’ are and relate them to the text.

Again, Thomson’s music and influence became more prevalent when he gained his position at the New York Herald Tribune in the 40s. To find his influence before that is a difficult, yet manageable task.