The Decadence of Ida Rubinstein

The allure of Ida Rubinstein has so many curves and angles that it is difficult to know where to begin investigation. Is it best to start with a glance at the brief overview of her life provided by the Encyclopedia article in the Jewish Women’s Archive?  Or better perhaps to delve completely into Ida Rubinstein: A Theatrical Life by Michael de Cossart?  Another temptation is Dancing Decadence and “The Art of the Beautiful Pose”, a reflection of the ways in which Rubinstein’s Jewish heritage affected her lavish lifestyle, and an evaluation of the sources of her inspiration and context for her movement, gesture, and spectacle. 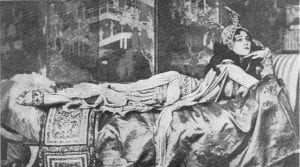 The brief Encyclopedia article is a good starting point; one must know the biographical details in order to begin thorough research.  Born in 1885 to a wealthy Jewish family in Kharkov, Ukraine, Ida Rubinstein first appeared on stage in 1904 in the title role of Antigone.  She soon attracted the attention of choreographer Michel Fokine, who would create “The Dance of the Seven Veils” for Rubinstein to dance in Oscar Wilde’s Salomé in 1908.  Serge Diaghilev offered her a position in the early seasons of the famous Ballets Russes; she lacked the necessary ballet training to have normal roles, so Diaghilev cast her as mime characters, e.g. Cleopatra in 1909 and Ta-Hor in Schéhérazade.  Rubinstein captured European audiences with her “[embodiment of the] exotic temptation of the East” [1], a reputation strengthened by her private life of both male and female lovers and nude modeling for painters Valentin Serov and Romaine Brooks.

Ida Rubinstein eventually formed her own dance troupe, Les Ballets de Madame Ida Rubinstein, and commissioned dances to leading composers of the day, most notably Stravinsky’s Le Baiser de la Fée (1927), and Ravel’s Bolero (1928).  She remained prolific into the mid-1930’s, converted to Catholicism in 1936, and a few failed attempts returning to the stage after the War prompted her to withdraw from public eye and settle in Vence, France until her death in 1960.  The Paris newspapers reported her death nearly a month later; her self-inflicted isolation had completely obscured her from public notice.

In Dancing Decadence and “The Art of the Beautiful Pose”, Vertinsky describes the significance of Rubinstein’s role in Salomé: “the theme of Salomé as a bestial virgin Jewess whose dance revived the dead embers of carnal life in even the most chaste of men was passed around writers and painters of the period, who used it to explore the links between gender and race in the realm of decadence” [2].  Female sexuality at the time was represented as both exotic and veiled; Rubinstein as Salomé was both her introduction as a strong female presence onstage in the early 20th century, and a foreshadow of her extravagant, and often scandalous, career as a dancer, choreographer, and producer in Russia and France. 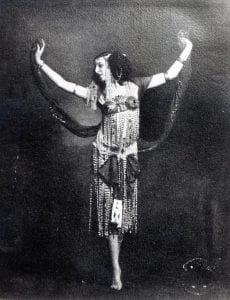 (Follow link to a short slideshow of Ida Rubinstein with an excerpt of Schéhérazade, audio only.)