Marcelle Meyer (1897-1958) is a French pianist who studied at the Paris Conservatoire. She is known primarily for her association with Les Six and had quite a successful career performing throughout Europe.1 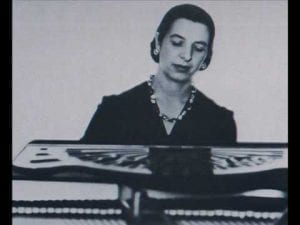 I’ll admit it – I signed up for Marcelle Meyer as my paper topic simply because she was a pianist. I had never listened to her recordings, read about her, or even heard her name before. As I started my research, I began to see why. When typed into the St. Olaf Bridge, her name produces zero book results, and only a handful of articles. Searching New Grove was hardly better, as the only result relating to her is a very short biography. Even the bibliography contained articles that were mostly not accessible through St. Olaf. It seems that secondary sources are not going to be my most valuable resource during this research paper.

I was much more successful with her actual recordings and primary sources relating to her. She has many recordings of Debussy and Ravel, as well as some startlingly gorgeous recordings of Bach. These recordings gave me a better understanding of who she was as a pianist, but still were not helpful for my research paper.

Finally, I began the search for primary sources. Meyer is mentioned quite often performing at a variety of venues and premiering many works from contemporary French composers such as Milhaud and Ravel. My most valuable resource was The Musical Times which included many reviews of her actual performances.

Her reviews are somewhat mixed, with the critics often praising her performance yet criticizing the work performed, or vice verse. One critic states: “[Miss Marcelle Meyer] possesses a brilliant pianoforte technique, but her range of musical sympathy appears to be somewhat limited.”2
Overall, after reading several different short reviews, it seems that the public was generally very impressed with her.

As I write my paper, I’ll have to be creative by searching for Les Six and others that she was associated with, rather than looking primarily for books and articles written about her.