When I selected Claire Croiza (1882 – 1946) as my research figure, I knew nothing about her. She was the last figure on the list of candidate topics, with the word (singer) in parentheses after her name. A ten-second Google search and Wikipedia check-in informed me that she was an influential mezzo-soprano and vocal teacher in early 20th-century France. A mezzo myself, I was mildly intrigued – I put my name next to Claire’s. Since my casual commitment, however, my preliminary research has convinced me that not only did I make a wise choice, our match might be meant to be. 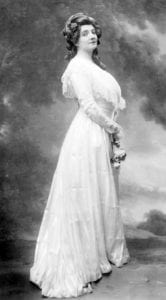 Secondary sources were most helpful in understanding Croiza’s significance. Of particular value were several JSTOR-located CD reviews of The Complete Recordings: Songs and Arias by Caplet, De Breville, Debussy, De Severac, Duparc, Faure, Honegger, Milhaud, Poulenc, Roussel, Schubert, released in 1999. Music critic David Baker published a thorough review in the Oct. 1999 issue of Opera News. Baker offers a warm description of Croiza’s voice, but more importantly, he offers valuable historical context about music’s evolution during the world wars and why Croiza was distinct amidst this transition: “The interwar period was apparently a simpler time than the Age of Interpretation that followed WWII; this impression gathers force when we contrast Croiza’s rich but essentially direct style with the more self-conscious delivery of … later singers.”1 Within this historical context, his description of Croiza’s “silken tune of a phrase, the sudden sunburst on a vowel rivet[ing] the attention again and again” emphasizes her focus on text communication as her distinct contribution toward 1920s French music.

Elwood McKee, writing for the ARSC Journal in 1999, reviewed this same album and explained the impetus for Croiza’s career transition from opera to song, mentioning that during WWI Croiza had given many concerts for the Red Cross in France, Belgium, Switzerland and Italy. Like Baker, McKee focused on Croiza’s “technique that allowed her to emphasize the text without detriment to the music, … demonstrate[ing] that Claire Croiza belongs among the great interpreters of French songs.”2 By placing Croiza’s vocal features in the context of the world wars, McKee fuses historical discourse with his own argument that Croiza played a fundamental role in refreshed musical communication.

My most complex yet helpful secondary source was found in the 1991 doctoral dissertation of University of Michigan PhD candidate Catharine Mary Schwab. Schwab effectively catalogs a performance database – a useful resource for crafting an interactive map, perhaps, or simply one within my mind. Schwab also includes all of the musical societies with which the singers collaborated, such as the Societe Nationale de Musique and the Societe Musicale Independante.3 A preliminary JSTOR search informed me that various issues of the Musical Times, from 1914 through the late 1920s, contain review articles, performance details, and travel stories of Croiza’s performances. I hope to access these papers through Interlibrary Loan to better understand the reactions of Croiza’s contemporaries to her performances and text emphases. 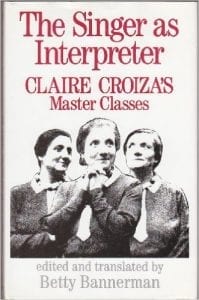 Primary sources were challenging to pinpoint. Of the ones that exist, most are recordings. Few writings from Croiza herself exist, since as music critic Roger Nichols mentions, Croiza rarely taught from notes. Primary source writings are available almost exclusively in Betty Bannerman’s 1989 book titled The Singer as Interpreter: Claire Croiza’s Master Classes. I have yet to obtain Bannerman’s text, but Nichols’ review of the book alludes to how valuable the book could be:
“Betty Bannerman has reordered and translated Mme Croiza’s thoughts on both recital and operatic work. She has drawn on three sources: Helene Abraham’s transcripts of Croiza’s public master classes, published as Un art de l’interpreitation: Claire Croiza (Paris, 1954); manuscript notes passed on by Croiza’s son, Jean-Claude Honegger; and notes from Miss Bannerman’s own lessons with her.”4

Croiza’s surviving recordings are scarce, numbering fewer than 50, yet are collected in one location thanks to Ward Marston’s 2-CD set titled Claire Croiza: champion of the modern French mélodie. 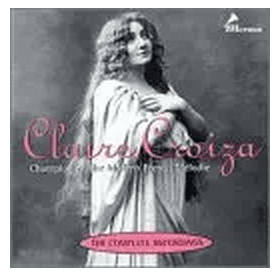 A preview recording can be heard on AllMusic.com:
http://www.allmusic.com/album/claire-croiza-champion-of-the-modern-french-m%C3%A9lodie-mw0001375643/credits

Excerpts from this CD collection are also on YouTube; several videos include a picture or two of Croiza. These videos track Croiza’s repertoire preferences: almost all video recordings are of song, rather than opera (the exception being her role from Pelleas et Melisande). Because the recordings are authentically 1930, they lack modern clarity, but they serve as a testament to Croiza’s diction.

Listen to a few of these recordings here:

In the past few days, both my preliminary primary and secondary resources have engaged me in Croiza’s influence, heightening my awareness of her presence as a key figure in a movement whose recognition was underappreciated and delayed. I have become acquainted with her commitment to communication and text interpretation, and have discovered that her basic ideologies closely parallel those of my own voice teacher. I sense that as I continue to utilize these resources, I will delve not only into her 1920s presence but also into her ideas themselves that, nearly a century later, are being discussed weekly in my own voice lessons.

3 Schwab, Catharine Mary. The Melodie Francaise Moderne: an Expression of Music, Poetry, and Prosody in Fin-di-Siecle France, and its Performance in the Recitals of Jane Bathori (1877-1970) and Claire Croiza (1882-1946). University of Michigan, 1991.