This is Francis Poulenc; 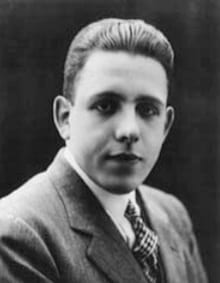 In addition to being one of the most famous 20th century composers, Poulenc was alive as the age of the celebrity was beginning to dawn. Interviews were documented and saved, letters and correspondences were saved, and people had an urge to remember things that famous people said and believed in. He was known for his foray into the contemporary side of musical composition. Many people, including those seeking French Nationalism, considered him a celebrity in French culture. Because of these things, there is a plethora of sources on Francis Poulenc.

One such example is a large collection of the letters that notable people wrote to Poulenc, and of Poulenc back to them, Correspondance 1 It’s an impressive collection, with over 1000 pages, and over 1500 correspondences. The letters themselves are all in French, so for those who can’t speak French, or aren’t up to translating them, this book is not helpful. There are many fantastic letters from Poulenc to people like Igor Stravinsky, Darius Milhaud, and Jean Cocteau. Sporadically placed between letters are actual photocopies of Poulenc’s original letters, in his script. Not necessarily a huge addition, but it’s definitely interesting. As primary sources go, I believe that letters are extremely important. It’s a direct view into the mind of someone else, and their particular thoughts about events. For example, in one of his letters to Stravinsky, Poulenc says;

This is a trivial example, but it provides much information. Poulenc was obviously a friend of Stravinsky, to the point where he sent him copies of manuscripts to work on and approve of. Therefore, what Stravinsky was doing, Poulenc approved of. It’s a certainly useful source.

Another source, out of many others, that has helped me understand Poulenc as a composer and Frenchman, is Composers on Music, 2  a book that has collected various articles where composers have expressed their opinions on music and composing. There’s a section of quotes from Poulenc. It’s important to remember, however, that the quotes are taken out of context. For one to put it in context, a lot more research has to be done. So the bias of the editor, Josiah Fisk, is extremely prevalent. The greatest thing about this source is that it separates the quotes into categories like, ‘Tradition,’ ‘The Character of French Music,’ ‘Young American Composers,’ ect, so that the reader can find a quote, or part of an interview, pertaining to a certain subject. This is extremely useful, but can again be put into a huge bias.

For a composer with an abundance of books, articles, and other sources written about him, highlighting just two seemed like an almost impossible task. There are other sources I will be using, biographies, music catalogs, and others, but these are just the two I found most interesting and helpful. The thing that makes them so easy to put into the context of “French” music is that they’re direct quotes from Poulenc himself. These are words that the composer chose himself, and so there’s no doubt that that’s exactly how he feels. This way, they’re directing in the context of how the composer would’ve presented his ideas. It’s a great start to begin to understand the man and composer of Francis Poulenc.