Windows Into the Life of Bronislava Nijinska

The person I have selected as the focus of my first research paper is dancer Bronislava Nijinska, who toured with the influential choreographer Sergei Diaghilev in his Ballets Russes dance troupe. My first step in research was to consult Oxford Music Online,[1] where I only found information about Bronislava’s brother, Vaslav Nijinsky; I then consulted the Oxford Dictionary of Dance,[2] where I found basic biographical information and enough details about her life to learn that Bronislava was also a choreographer for Diaghilev. I also learned that in 1925 she resigned from Diaghilev’s dance troupe after a disagreement, leaving to work as a freelance choreographer. This piece of information will likely serve as the basis for my paper, as I attempt to uncover information about the nature of this disagreement. 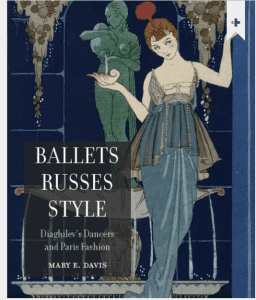 This book will serve as an introduction to the world of the Ballets Russes. Mary E. Davis, Ballets Russes Style: Diaghilev’s Dancers and Paris Fashion (London: Reaktion Books Ltd, 2010), 23-61.

The next phase of my research consisted in finding as many resources as possible that might help in my search for information about Bronislava’s time in Paris, as well as that of her brother, from whose perspective I will likely write my paper. I knew I needed to find some information about the Ballets Russes and its tour to Paris, so I found a nicely illustrated book, available both online and in print, called Ballet Russes Style: Diaghilev’s Dancers and Paris Fashion,[3] which will likely help me to create a visual image of the dancers as well as the role they played in Parisian cultural life during the 1920s. In my search for scholarly journal articles, I came across two pieces by Jane Pritchard from the Dance Research journal[4] that are essentially the itineraries of the travels of the Ballets Russes from 1909 until 1929, compiled from various scholarly resources. These articles will be valuable to me inasmuch as they allow me to pinpoint certain performances of which Branislava would have been a part. The author concedes that there may be holes in the information presented, simply as a result of the fragmentary nature of the research she was pulling from; thus, I will not likely use this resource as more than a stepping-stone to other pieces.

The two most valuable books I have found are my primary sources: The Diary of Vaslav Nijinsky[5] and Bronislava Nijinska: Early Memoirs.[6] These will include information about the siblings’ experiences, as well as a window into their inner lives. At first glance, Bronislava’s memoir includes many pictures which will be valuable to me, but the accounts only reach as far into her life as 1914. This will help me to find out about her life leading up to the 1920s, and the experiences and relationships that shaped her, but will not provide any information about what I hope to include in the bulk of my paper. Overall, the mix of types of sources I have found for my first paper promise to be extremely helpful to me in constructing a window into the influence of Bronislava Nijinska on the music scene of 1920s Paris, and I look forward to continuing my search for sources and information.