Gumbrecht’s book, In 1926, presents an excellent tool for music historians to consider using because of its non-linear, non-narrative format. Gumbrecht writes about the year 1926 as a completely isolated event, rather than discussing which events led up to 1926 and what ended up happening in the years after. The result is that the reader experiences what it would be to actually be living in the year, rather than being aware that they are reading a historical narrative. Gumbrecht discusses artistic topics such as “Dancing” and “Jazz”, but does so in a manner that ties in other social happenings of the year, such as gender roles and the view of the present vs. the past. Rather than talking about the music that led up to the creation of Jazz, he chooses to talk about how sports, social ideas, and political events contributed to Jazz in that year. 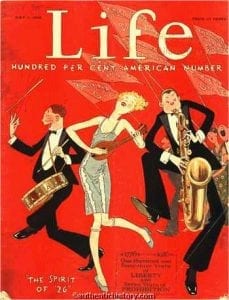 This can be an excellent approach to experiencing music history, as we so often have a retrospective point of view, seeing connections between pieces and composers that were not evident at the time. Our discussion of music history is very linear – this piece led to this piece, led to this piece, etc. While this is an important point of view to consider, it would also be helpful, not to mention fresh and unique, to take Gumbrecht’s approach of simply presenting all the things that were happening in a specific year of interest. Too often we’ll talk about composers in terms of who influenced them and whom they influenced. Gumbrecht’s approach allows for a greater understanding of the time period itself, rather than a specific individual or piece.

This model is important to keep in mind when discussing a time period because we often limit that period to three or four great composers from it. While it would be impossible to study everyone writing music in a particular period with the same depth that we look at Bach and Beethoven, it is essential to understand trends and what was popular during the year of interest. One needs to look at what was most often performed, what was praised by critics, what dances were popular, and what was happening socially and politically to fully understand what is important about that specific period.