A Mentality of Quest and Exploration

Long before the advent of public-domain internet, Hans Gumbrecht envisioned a multidimensional historiographic method that would venture beyond traditional contextualized, bias-laced narratives. In his aptly-titled “User’s Manual” to his 1965 publication In 1926: Living at the Edge of Time, he explains that his book is an experiment to conjure a vivid 1926 using a deceptively simple method: writing. In contrast to historians before him, Gumbrecht aims to use writing not for prosaic enhancement but for transparent exposure. He wishes to model writing in which the voice of authorship avoids crafting a synchronous depiction of the past, instead revealing simultaneous and often discordant historical realities. Rather than telling the story himself, Gumbrecht seeks to allow realities to stand unadulterated and to tell their own stories as their simultaneous natures intersect with one another. In a quest to explore his perception of history’s didactic function, Gumbrecht aims to display the complex, interconnected “web of behaviors and realities” that shaped 1926.

Ironically, Gumbrecht himself seems to be living at the edge of his time. Presner et. al conceptualize an interactive search and discovery tool for “lives, not pages;” they imagine webs of reality consisting of multilayered stories, pictures, maps, artifacts, sounds, and other possibilities, pushing beyond Gumbrecht’s words-alone vision or even rendering it comparatively detached. Even though this second model offers distinct advantages, I believe that both models, and not Presner et. al’s alone, are useful to music historians.

The merits of Presner et. al’s proposed “HyperCities” model are clear, and they are exciting. The discipline of music history is about music, about history, and about the interplay, correlations, and causations between these two areas. Therefore, the most natural and the most thorough way to study music history is to interact in all possible ways with lives and realities of each period. Music history’s enature seems to demand the types of interactions that HyperCities affords, encouraging holistic experiences in which recordings, physical locations, people, personal stories, and discordant realities not only embellish an “objective timeline” but inform one another as well. Without any of these pieces at play amongst the others, part of reality is missing.

Yet, Gumbrecht’s “dated” model of raw text should not be devalued. Presner et. al’s thick mapping method potentially offers so much information that musicologists might find themselves inundated with cluttered puzzle pieces, posing challenges to orienting oneself and conducting explorative assessments. Scholars may also become so enchanted with thick maps that when information does not exist, their analytical abilities waver. Most importantly, because every layer of a thick map must consciously be introduced, the information present in a thick map could inherently contain the very biases Gumbrecht seeks to avoid. In contrast, Gumbrecht’s mode of allowing “facts to speak for themselves” is one of simplicity, removing storytelling devices so that simultaneous realities become exposed to inform the given time period. Perhaps Gumbrecht’s assessment of plainly-presented simultaneities can serve as a starting point for “thick mapping,” and as a checkpoint to which “thick mapping” should strive to be accountable.

Gumbrecht and Presner et al. both imagine a process of adventuring rather than answer-seeking, each implicitly asserting that musicological scholarship has more value than simply analyzing the past for the purposes of the present. This methodology – the mentality of quest and exploration, rather than answer-seeking – is perhaps the most valuable idea. Whether the methods are pages or digital layers, the exploration mentality enhances a musicological culture of thinking beyond the obvious, encouraging scholars both to seek research destinations and to explore ever further. 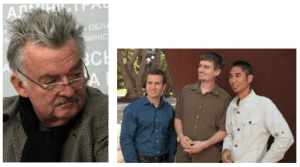