As I comb through the digitized leaves of various newspaper archives, complimentary of the French Bibliothèque Nationale, there are certain elusive figures who reappear with striking frequencies. One of these is a gentleman by the name of Feodor de Chaliapine (also known, in editorial circles, as M. Chaliapine, elsewhere spelled as Fedor Chaliapin – clearly orthographical irregularity was not merely a trait of the Elizabethan). 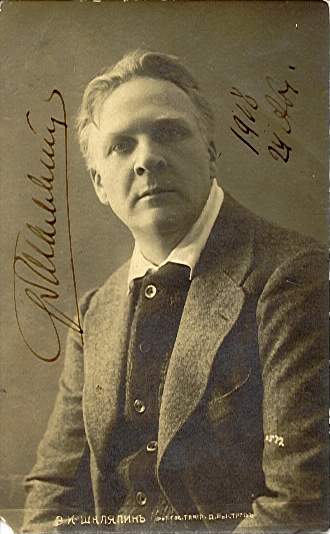 Imagine my delight when the abbreviations resolved into a name during the course of my research into Russian émigré populations in Paris! Not only was there documentation on this figure whose last name, at least, often appeared in my purview, but there was a story:

“He, with the ballerina Anna Pavlova, had the greatest international popularity of any Russian living in the West”1

A bass who frequently performed at the Paris Opéra, Feodor Chaliapine left Russia in 1921, during the great emigration floods fleeing the Bolshevik coup d’état. Although he enjoyed popularity among Parisian audiences, he seems to have been less popular among his exiled countrymen. After all, he did leave a little late – not being particularly political given the option, he thought at first he might ride out the new regime. To his fellow émigrés, it may have smacked of disloyalty (more on them to come…).

His final performance at the Opéra was July 8, 19242. I should like to think that he enjoyed retirement until his death in 1938. On that matter, though, I fear I remain blissfully ignorant. For now…

And for your listening pleasure: